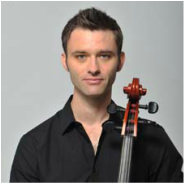 Cellist Robert Burkhart combines a deep commitment to the existing cello repertoire with what the New Yorker magazine calls "an adventurous spirit in new music". With performance credits at Alice Tully Hall, Bargemusic, Carnegie Weill Recital Hall, Merkin Hall, and The Rose Studio at Chamber Music Society of Lincoln Center, Robert has also appeared as a soloist throughout Japan as a member of the New York Symphonic Ensemble, and been featured in recital on WQXR's Young Artist Showcase.

Robert's major teachers include Paul Tobias at The Mannes College of Music and Uri Vardi at University of Wisconsin-Madison, and he has worked with Timothy Eddy, Aldo Parisot, and Janos Starker at festivals and masterclasses. Robert has taught at Juilliard Pre-college, Mannes Prep, Syracuse University, and Music Conservatory of Westchester, and been artist-in-residence at Yale University and the Banff Centre for the Arts in Canada.  His recent CD "20/21: Music for Cello and Piano from the 20th and 21st Centuries," features pianist Blair McMillen and the premiere of a work for cello and piano by composer Andrew Waggoner. Robert's recording of solo Bach on the American Express commercial "Don't Take Chances. Take Charge." has garnered national attention.