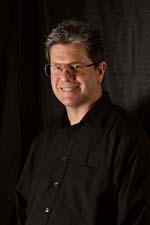 Nelson Padgett, a pianist known for his poetic and sensitive music making, enjoys a multifaceted career as a soloist and chamber music collaborator. He has appeared with the Houston Orchestra, the National Symphony Orchestra at The Kennedy Center, and the North Carolina Symphony. Born in North Carolina, Mr. Padgett attended the North Carolina School of the Arts, the Peabody Conservatory of Music, and the Banff Centre School of Fine Arts.

Mr Padgett has performed worldwide with the Philip Glass Ensemble since 1988, most recently in France, Belgium, the Netherlands, Sweden, Scotland, Hungary, and Los Angeles. Other group collaborations have included Steve Reich and Musicians, Orpheus Chamber Orchestra, and Newband, with whom he has performed and recorded the microtonal works of Harry Partch. Classically Mr Padgett has recorded for the Harmonia Mundi, EMI Classics, and Orange Mountain labels. He has also recorded for film and television, including soundtracks for the movies "The Deep End", "Bee Season," the children's show "Little Einsteins and he is heard on the Poland Spring commercial "Born Wild".

Mr. Padgett has shared the stage with many well known violinists including Pinchas Zuckerman, Pamela Frank, Elmar Oliveira, Vadim Repin, and Ilya Kaler. He recorded ìThe Miracle Makersî with Elmar Oliveira at The Metropolitan Museum. Co-ordinated by Bein and Fushi, it features Mr. Oliveira giving two representations of each piece, first performed on a Stradivarius and then performed on a Del Gesu. He performs as an official pianist for the prestigious International Violin Competition of Indianapolis.

Mr. Padgett has lived in New York City since 1987 and devotes much of his time to collaborating in chamber music classes, recordings and performances for New York's premier music schools, including The Juilliard School, Mannes College of Music, Manhattan School of Music, and New York University.